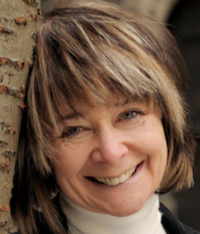 Yesterday I had the pleasure of attending a public conversation between Dr. Monica Azzolini and historical novelist Sarah Dunant, at the School of History, Classics & Archaeology at the University of Edinburgh, and of speaking to her briefly afterwards. The event was primarily a promotion for the most recent novel in her series dealing with the Borgias – In the Name of the Family.

Sarah Dunant cut her literary teeth writing ‘thrillers’ which, she said, taught her the art of storytelling. She is a historian by education, and loves historical research. Research, when produced for academic consumption, however, tends to be published by university presses and remains within the academic sphere, with an academic readership. Fiction, on the other hand, liberates the subject to a wider readership, and while Sarah does not write instrumentalist novels, she is well aware that her readers are learning whilst enjoying an absorbing novel. So she makes sure that her research is exhaustive.

It has often been said before when it comes to history – “Where are the women?” We have the impression, due to ‘taught’ history seeming to be a procession of great men, great battles, great events, that half the world’s population is invisible, and that this invisibility is somehow uniform throughout history. Sarah presents Renaissance women to us in her novels – in convents, as courtesans, at court – living unexpectedly rich and varied lives, even though they may be distanced from direct involvement in the ‘great events’. Lucrezia Borgia is almost invisible, except for the gossip put around by enemies of the Borgias. Pinturicchio’s depiction of St Catherine of Alexandria may be the closest we have to a portrait of her, but as a dynastic asset she was arguably as important as her father Rodrigo and her brother Cesare. Although she was only thirty-nine when she died of natural causes, she outlived them both.

Sarah Dunant, who says she is always “willing to take on the real history,” read to us a passage from her novel, describing the process of serving as a witness to the consummation of Lucrezia’s marriage at Ferrara. There was no description of the bride’s feelings and thus no kowtowing to the stereotypical idea that women writers ‘do’ feelings, but rather an account of the ‘bodily bureaucracy’ that goes with a dynastic match. 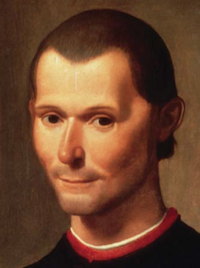 In the Name of the Family introduces to Sarah’s readers to a young Florentine diplomat – Niccolo Machiavelli. This is a name that often strikes a chill – after all, the adjective that derives from his name is used to describe the ruthless and amoral wielding of political power – but a recent book by Erica Benner, Be Like the Fox, reveals a staunch believer in republican liberty and a scrupulous recorder of the realpolitik of Renaissance Italy. Sarah’s portrayal of him is that of a relative youngster, who has a wife back home who seems quite fond of him, and who worries about whether his attire is smart enough for his surroundings, whether his doublet is straight, and so on. He is a man who has been chosen for his diplomatic job because he shows much promise, but the wily observer has yet to emerge. Writing The Prince is many years ahead.

To Sarah Dunant the Renaissance is an era of “red hot modernity.” She is well aware that its cruelty and beauty are not two separate aspects of the time, but are interwoven, along with all the daily banalities.

I would like to thank Sarah Dunant, Monica Azzolini, and of course the University of Edinburgh for hosting the event.