Brightly lit though Pitlochry Festival Theatre might be at night, buzz though festival-goers might around such visiting celebrities as Ronnie Browne, Gregor Fisher, and Charlotte Green, there comes a time when a hush falls over the handful of brave ones who stay behind for the storytellers’ lock-in. Collars are turned up at the suggestion of icy fingers at the neck, and there are anxious glances over the shoulder at the hint of a presence walking through the River Room. Attention is then fixed on the storytellers – actors Dougal Lee and Helen Logan – as though to draw comfort from them. But there is no comfort there. They have us under their spell! 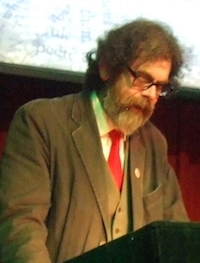 This is how it is at every ‘Fearie Tales’ event during Winter Words. Eight chilling tales are read to us in four late-evening sessions. The stories themselves are selected from submissions by contemporary writers from Scotland and beyond. On Friday 12th of February I was there myself. I spoke above of a lock-in, and indeed one of the stories told to us was set at a remote inn after drinking hours, where a stranger told the small company of the nightmares that had beset him since he was a child, as we feared for his mortal safety. The scene in the cold morning light, however, was a plot twist that stunned…

To an extent you never know what to expect at ‘Fearie Tales’. I was there in anticipation of hearing client Marie Marshall’s ‘The Ice House’ – was that you, Marie, lurking by the door of the River Room, flitting away when the applause came? Really you are too shy.

‘The Ice House’ was read by Helen, who put layers of character into her reading. The story itself was a tribute to M R James, arguably the greatest writer of ghost stories in the English language. James himself makes an appearance in the story, as an avuncular mentor to the narrator – a young, female, law student at the time of the action – and provides, though he doesn’t realise, the denouement in the form of a letter. The story takes us, via a discussion about humankind’s deepest terrors, a sense of dread in a lonely place, and the delirium of a fever, to the revelation of a brutal crime. The construction of the story is very Jamesian – a typical Marie Marshall emulation – and the sense of period and place is perfect. I do hope there will be some way in which this story can be read more widely, whether Marie places it on her web site, where she does showcase a handful of her stories, or in a collection.

I shall be back in the River Room at Pitlochry on Saturday 20th, when another client’s story is due to be performed. This time it will be by Lucy P Naylor, the Queen of Quirk, and the action will range from a Dundee ‘pletty’ to the city’s ancient Howff graveyard.

The canny short-story-writer knows to pen and submit something written with Dougal’s or Helen’s voice in their ear, to structure their story to suit reading aloud, and to consider each actor’s strength in characterisation. Nothing facile gets through the selection process at Winter Words, and you know that by the time each ‘Fearie Tales’ session comes, that you will hear what is probably la crème de la crème of the Macabre. The festival as a whole is worth a winter break here in the Scottish Highlands.